As the sun went down and the temperatures fell in Bahrain on Friday evening, one team were suddenly in their element. Ferrari’s Kimi Raikkonen and Sebastian Vettel led the second practice session with ease, closest rivals Mercedes unable to get within half a second of the scarlet cars. 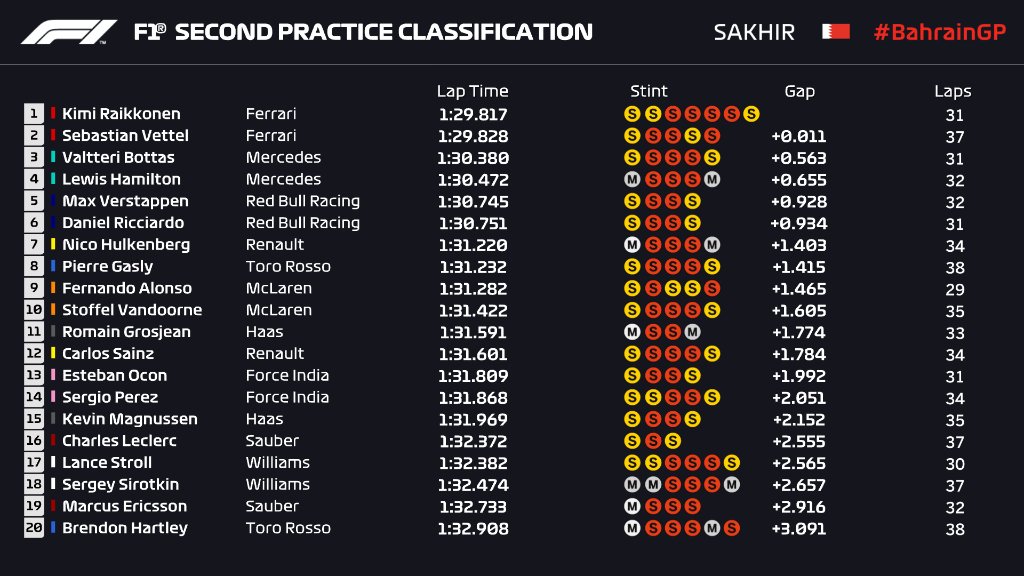 Of course FP2 is also about race simulations, but in terms of one-lap pace on the fastest, supersoft rubber, Ferrari had a clear edge, despite Raikkonen being forced to abandon his car 15 minutes early after his pit crew failed to attach a wheel properly (stewards subsequently handed the team a €5000 fine for an unsafe release).

Unlike the SF71H, Mercedes’s W09 seemed far less happy on the red-marked rubber, as Valtteri Bottas edged out team mate Lewis Hamilton for P3 in the times. As for FP1 leaders Red Bull, Max Verstappen – back on track after his earlier electrical problems – and Daniel Ricciardo had to settle for fifth and sixth respectively, both men almost a second slower than the Ferraris.

Nico Hulkenberg was not entirely happy with his Renault, but put it seventh nonetheless, while Pierre Gasly had his second impressive session of the day, the Frenchman taking his Toro Rosso to eighth. Both McLarens improved over FP1, with Fernando Alonso and Stoffel Vandoorne rounding out the top 10.

There was early drama when Sauber’s Marcus Ericsson slid side-on at speed into the Sakhir gravel, but the Swede was able to regain the circuit without major damage. Deeper into the 90 minutes Ricciardo had a lucky escape when he was almost side-swiped by a slow-running Bottas, who complained his team had not forewarned him of the Australian’s approach.

After their low-key showing in FP1, Force India quietly moved up the order, with Esteban Ocon and Sergio Perez 13th and 14th respectively behind the second Renault of Carlos Sainz. Midfield rivals Haas still had the advantage over both teams, with Romain Grosjean 11th, though this time team mate Kevin Magnussen was only 15th.

Charles Leclerc outshine aforementioned Sauber team mate Ericsson, 16th to 19th, while Williams had another disappointing showing. This time it was Sergey Sirotkin who spun en route to 18th, while team mate Lance Stroll was only a fraction quicker in 17th.

Unhappiest man arguably had to be Brendon Hartley. As Toro Rosso team mate Gasly again made the top 10, the New Zealander propped up the time sheet, over 1.5s slower than his French colleague.

It all leaves the teams with just one more hour of practice ahead of Saturday’s crucial qualifying session – and right now at least, Ferrari must be clear favourites for pole…