In Datatag Qualifying BSB ahead of the second round of the Bennetts British Superbike Championship at Brands Hatch this afternoon with a margin of 0.097s over reigning champion Shane ‘Shakey’ Byrne. 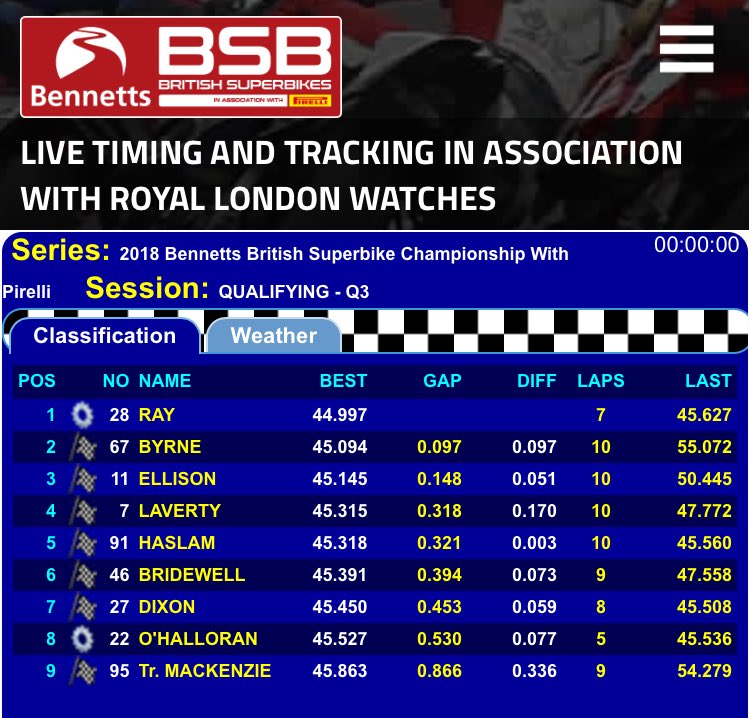 A rapid qualifying session saw Ray and Byrne duel for the pole position ahead of tomorrow’s opening race, but the 20-year-old hotshot had the edge in the closing minutes to snatch the lead position from his Be Wiser Ducati rival.

James Ellison had continued his momentum from free practice to force his way up the order into third place for the Anvil Hire TAG Yamaha team, pushing Michael Laverty on the leading Tyco BMW back onto the second row.

Leon Haslam had been moving up the order during the final stages of Q3 but he had to settle for fifth place as the JG Speedfit Kawasaki became the fifth different team and manufacturer to feature in the top five.

The ‘Pocket Rocket’ was narrowly ahead of Tommy Bridewell, who had been the early pace setter for the Movuno.com Halsall Racing Suzuki team, and Jake Dixon for the RAF Regular & Reserves Kawasaki team.

Honda Racing had a high-pressure start to their Q3 after Jason O’Halloran crashed out at Druids in the final moments of the Q2 session.
He was able to return to the garage and the team worked hard to turn the Fireblade around to get the ‘O’Show’ back on circuit. The hard work paid off and the Australian was able to head out for Q3 to qualify in eighth position, just ahead of Tarran Mackenzie who was the highest placed McAMS Yamaha in ninth place.

BSB: Shakey versus Ray in race one battle of Brands Hatch