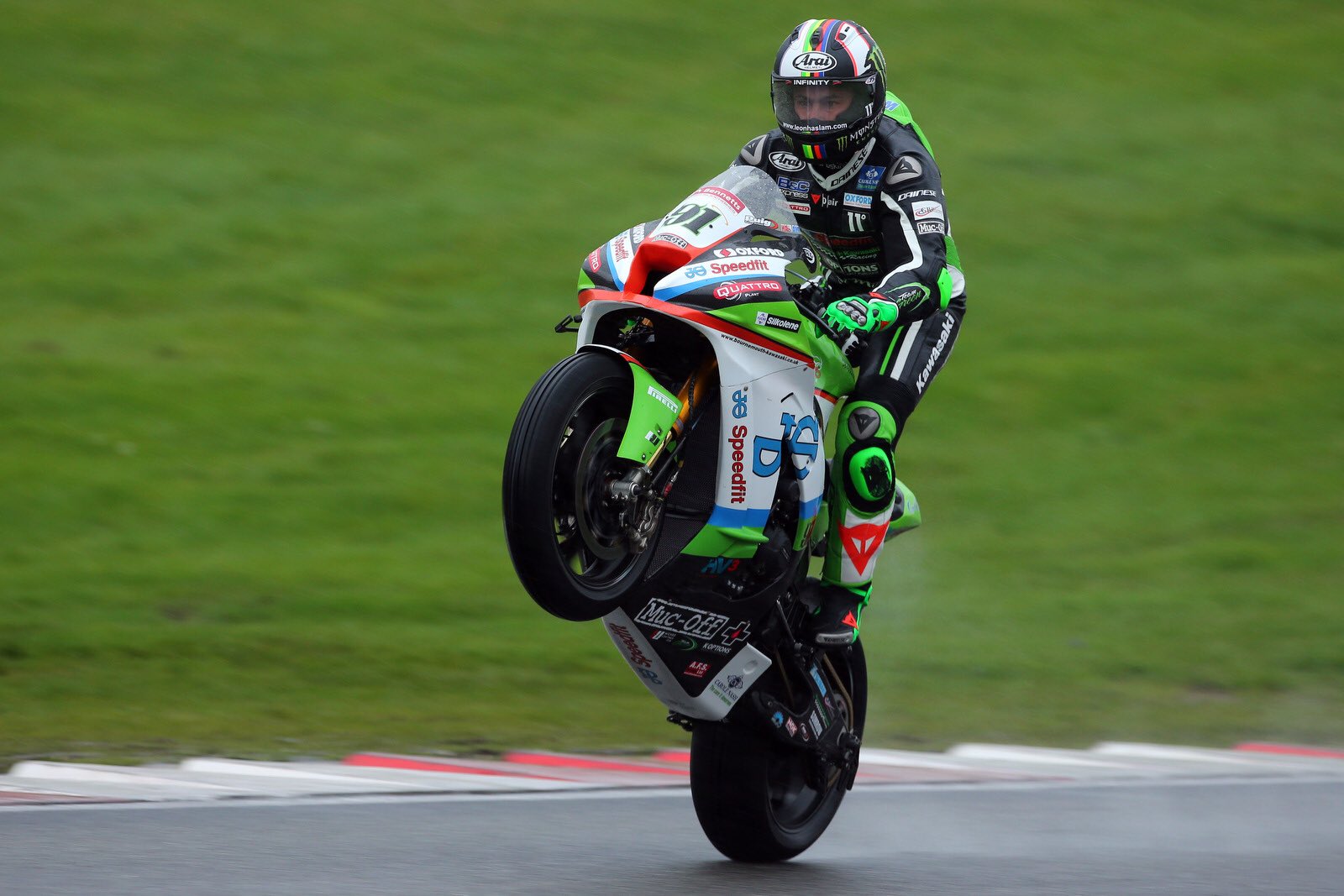 Leon Haslam mastered the damp conditions to become the third different race winner in the 2018 Bennetts British Superbike Championship, holding off the attack from Glenn Irwin and Michael Laverty to have the edge by just 0.367s at the chequered flag.

Bradley Ray had taken the advantage at the start of the race, leading the field into Paddock Hill Bend for the first time ahead of Haslam, Jake Dixon, race one winner Shane ‘Shakey’ Byrne and Christian Iddon.

Ray was holding the advantage but the race was red flagged on the seventh lap when rain began to fall. On the restart Haslam took the advantage at the start from Richard Cooper and Iddon with Dixon in close contention.

On the second lap Haslam and Cooper began to trade blows as the pair swapped places several times in their quest to remain at the head of the field.

By lap three Cooper was ahead and Haslam wasn’t giving in, but the JG Speedfit Kawasaki rider was soon under attack from Dixon, who moved ahead before the ‘Pocket Rocket; repaid the move. Cooper’s race ended prematurely as he crashed out at Clearways on the seventh lap ending his hopes of making amends for his race one slide off.

At the front Haslam was in the lead, but Laverty had closed in and made a move with a dive down the inside into Paddock Hill Bend on the ninth lap to take the advantage for Tyco BMW. Dixon was fighting to move up the order, but the RAF Regular & Reserves Kawasaki rider crashed out unhurt at Graham Hill Bend.

Laverty had the edge, but Irwin was closing in and moved ahead of Haslam as the leading trio had an advantage over the rest of the pack. Irwin made a decisive pass at Druids to capture the lead on lap 20, but on the final lap he had a moment which gave Haslam the momentum he needed to move into the lead at Surtees and hold off his Be Wiser Ducati rival to the finish line with Laverty claiming third place.

Byrne had to settle for fourth ahead of Josh Brookes who had a resurgent race two for McAMS Yamaha as he forced his way ahead of Iddon and championship leader Ray in the closing stages of the race.

Tommy Bridewell held off rookie Tarran Mackenzie who scored his first top ten finish in ninth place ahead of another rookie, Carl Phillips on the Gearlink Kawasaki.

BSB: Shakey versus Ray in race one battle of Brands Hatch

BSB: Ray launches to pole position ahead of home race at Brands Hatch